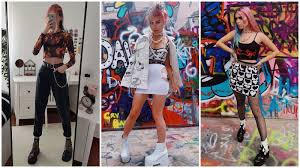 E-girls and e-boys, sometimes collectively known as e-kids,are a youth subculture that emerged in the late 2010s and has distinctive accessories, items of clothing and makeup. This fashion trend is almost exclusively seen on social media platforms such as TikTok, Instagram, Twitch, and Twitter. A great deal of E-kids are aesthetically close to the earlier emo subculture in the 2000s.

The style and current attitude towards life of E-girls and boys are especially creative. For them, involvement in fashion and make-up is perceived as a game and some disconnect between childhood and adulthood appears apparent – the new generation doesn’t try to hide what was used to be hidden in the past. Egirl outfits differ in that they are vivid and usually characterized by chaoticness and some kind of a mess of all that E-girls and boys create.

Egirl style is exceptional because it is not necessarily bound to an outfit whereas other non-digital subcultures usually are. Outfits commonly consist of baggy, thrifted items of clothing. In particular, some e-girls prefer to wear mesh, plaid, and oversized shirts or sweaters, crop tops, platform shoes. When it comes to Accessories, they are supposed to highlight one’s soft face and makeup concept. Also, grunge body ones can be used. So chokers, beanies, chain necklaces, and dangle earrings are recommended to be put on.

Most egirl outfits are based around layering, which comes from Korean Ulzzang Fashion. Therefore, the look which is made up of monochrome clothes layered over long sleeve shirts or mesh-net tops is also popular among E-girls and boys. Besides, face piercings are not unusual for them.

A typical e-girl, for example, dyes her hair in pastel or neon colours, mostly pink, blue or other colours of the rainbow. Also, she wears it pulled back in two ponytails. Hair dyed two different colours down the centre, known as split-dye hair, is common for E-kids of both sexes. As for the make-up, E-girls face is covered with, it is considered to be the most iconic part of her look. It is usually heavy, severe and garish, in particular eyeshadow and blush.
You can imagine a typical e-boy who looks like a skater In the late ‘90s aesthetic, including a beanie, baggy pants, and hair that comes down over his eyes. Typical girl outfits include oversized band t-shirts or mesh tops paired with high-waisted pants or humble plaid skirts. In addition, E-girls often wear half-pigtails.

Showcase Your Style with A Trendy Seiko India Watch