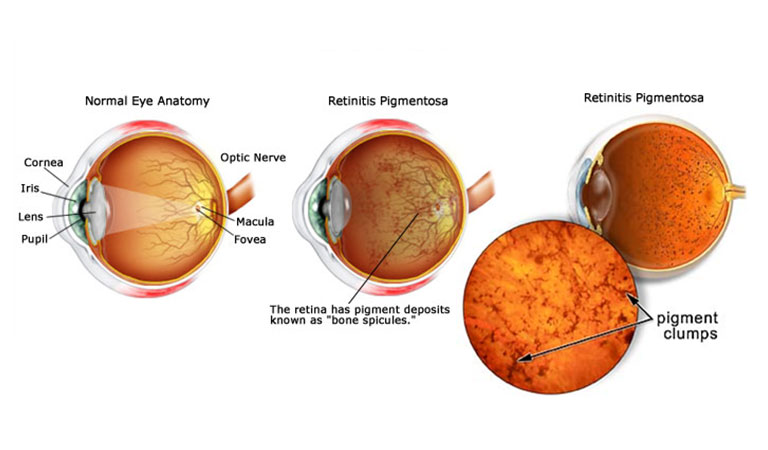 Eyes are the most sensitive part of our body. We can’t ignore any eye disorder because some of the retinal diseases lead to blindness. Retinitis pigmentosa (RP) is one of the most critical eye disorders. One can lose their night vision capability and also leads to blindness because of this serious retinal disease. RP is a critical and generic retinal disease that decreases the cells of retina and one can also lose their night and side vision capability. RP is a rare eye disorder. According to a survey, it affects just 1 in 4000 people in the world. Either it is a rare eye disorder but we can’t ignore the symptoms and its harmful results. One has to be educated enough about RP, its symptoms, causes, and its treatment. We are going to discuss briefly its symptoms, causes, treatment and how it affects our eyes. Keep reading this article if you want to get educated enough to fight with this eye disorder.

Our rods get more affected than cones in the early stage of this disease. When rods get effected one starts experience night blindness. Visual field vision also looses. It may affect our daily living tasks such as reading, driving, walking in the starting stages. One will also lose its capabilities to recognize faces and objects. At the last stage of this disease, one will lead to blindness.

The reason behind retinitis pigmentosa:

Near about 50 genes are working in the retina. These genes instruct to making proteins in cells. It generally harms some of these genes. When these genes didn’t work properly the cells in the retina will not further be able to carry proteins to cells called photoreceptor. The proteins produced by other mutations are toxic to the retina cells. Which didn’t function properly, in this situation, photoreceptor gets damaged badly and affects our retina with Retinitis Pigmentosa eye disorder.

Here we have discussed briefly about such a critical eye disorder known as Retinitis Pigmentosa. We have also discussed all the symptoms, how it progresses, how it affects our retina and its treatment as well as. One have to be educated enough to fight with any physical disorders. So that patients can have the proper treatment and get rid of those physical disorders. We hope the information given by us will help you to get educated for the same. Our experts will want to know your reviews on the same.