Have a Drink on Me: Popular Arab Beverages 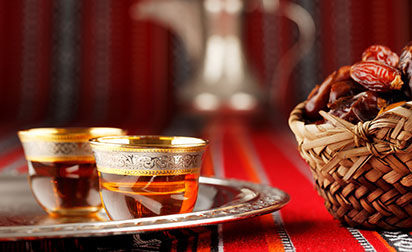 An American friend of mine, perhaps  inspired by reading a book about Arabic proverbs he carried around with him for a week or so, once came up with his own as we were leaving an Arabic friends house after dinner. “You know,” he exclaimed, “If anyone leaves the house of an Arab hungry, it’s his own damn fault.”If you’ve ever been to an Arab’s house, you know this undeniably true as the hostess will pile spoonful after spoonful of food on your plate until your one bite from having to be rolled like a human bowling ball to your car afterwards. This is not only true when you’re invited for dinner, however, but also true if your just there for a short visit, as an Arab host or hostess will fill you full of drink that your stomach will feel like a giant fishbowl as you swish your way outside.

Thinking back on this reminded me of all of the different drinks I have had when adventuring around the Arab world, so I thought I’d share a few of the more delectable beverages I’ve had the pleasure of drinking in an Arab home.

Whether arriving at your hotel or visiting a friend’s house in Morocco, your sure to be greeted with an offer for mint tea, a refreshingly hot drink Moroccans consume several times a day.

If you’re visiting Egypt, then you have to try karkadeh tea. Both sweet and sour at the same time, this tasty beverage is made with the hibiscus flower and is served both hot and cold.

As the name suggests, this combination of sliced fruits, apple cider, and sparkling water can be found in houses all over Saudi Arabia. However, don’t let the champagne part fool you – there is absolutely no alcohol in this drink at all, meaning you can drink as much as you want without the need for assigning a designated driver.

Popular throughout Lebanon and Syria, Yerba mate is made from the dried leaves and twigs of the yerba mate plant, part of the holly family, which are steeped in hot water to make an herbal tea.  It’s said to have the strength of coffee, the health benefits of tea, and the joy of chocolate. It is said that those that imbibe yerba mate do so to awaken the mind, perform extraordinary feats and to exchange confidences. Think of it as Mother Nature’s own energy drink.

Known throughout the Levant region, arak is a drink made for the brave, as itis a colorless liquor made from grapes and aniseed. Remember kids; drink responsibly if you’re going to try this one!

Mostly found in, but not only limited to, Jordan is the popular Arabic coffee. Originally served as a sign of respect to guests of the Bedouins, it is now grown widely popular throughout the Arab world.

Infused with cardamom and slightly bitter, it’s usually served in a very smallArabic coffee cupscalled a finjan and with some dates on the side.

After reading this post, if you’re still thirsty to learn more about the Arabic language and Arab culture, come and satiate yourself at kaleela.com. And don’t forget to keep an eye out for the soon-to-be-released Arabic language learning app from Kaleela, available for both Android and I-phones.