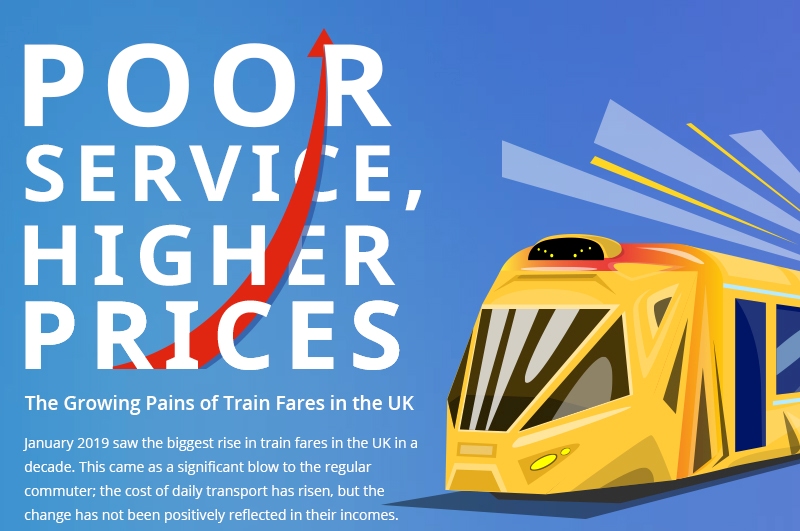 The public transport system, including train services, has been a longstanding topic of frustration here in the UK ever since the rail network was auctioned off to private companies in 1994.

Between the years of 2018 – 2019, a whopping 1.76 billion Brits traveled by train. During that same period, an average of 660 trains was canceled every single day. This meant that British train users lost four million hours of their time caused by significantly delayed trains. This is more than any other year on record!

During January 2019, we saw the biggest train fare increase in a decade, with rail fares increasing by a staggering 3.5%.

A journey that takes just 20 minutes from Watford Junction to London Euston, costs £3,680 in an annual season ticket. Depending on the route itself too, UK commuters can expect to pay anywhere up to £5,000 in a season ticket.

Research by the travel watchdog, Transport Focus, had found that less than 47% of British rail passengers were satisfied with the value and service provided by the railway service in the UK. On top of this, during 2017-2018, many of the private rail companies had handed over £200million worth of dividends to shareholders, resulting in an increase of over 6.5%.

Despite receiving over £3.8 billion to these companies over this period, the likes of the Great Western Railway paid out less than £23 million in compensation to its customers!

When we compare the rail fares of the UK against other European countries, over a 35-mile commute in the UK can see up to 14% of a monthly wage. In the likes of France, over the same distance, this only accounts for up to 2.4% of the French average monthly wage.

At Cabzilla, we are determined to get you to your destination on time, for less.

Our coach, minibus and taxi hire services are available throughout the United Kingdom. Whether you’re heading out to a football match, or even getting a group together for a party, you can rely on us.

What You Can Expect From a Trip to Tampa, Florida

Immigration to the USA: Grenada is ready to help